I'm Jessica McDaniel, and May 2021 will mark my 18th anniversary photographing babies and their families all around Boston. 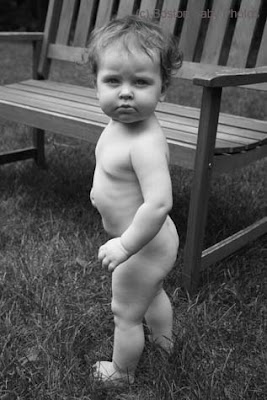 “For those who know me, it wouldn’t surprise them to know that I debated dressing my son up in a fairy costume for a photo op. After much consideration, I decided to save him the embarrassment, and hold off to see if I’d have a girl. When the doctors handed me my little baby girl Quinn, I thought “would it be wrong to have her hospital photos taken with fairy wings?”. After realizing how crazy this was, I brought her home, and held off on the fairy costume until our photo shoot with Jessica.

The morning Jessica came, I had several outfits laid out for Quinn, one being her pink fairy costume. It was time, hurray! It was a beautiful day out, and it was going to be just perfect. The photo shoot was going very well, and Gavin and Quinn were having a blast with Jessica. It was time for a costume change! As Jessica watched me try to stuff my meaty little lady into her fairy costume, she must have seen the look on my face go from excitement and determination, to another look. Although you may be thinking this other look was disappointment, it wasn’t. It was the look of a proud mom who doted on her naked little girl. In my eyes, she’s a perfect little fairy princess with or without the wings.

The whole photo shoot was amazing. Jessica improvised after the costume malfunction and took a bunch of shots in the buff, which turned out to be some of my favorites from the shoot. Here is one of them!

Posted by BBP, aka Jess

This site uses Akismet to reduce spam. Learn how your comment data is processed.